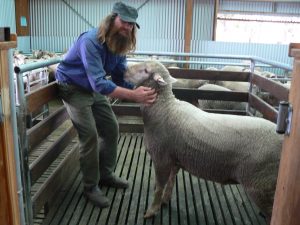 As a child he was affected by the massive barrel that De Quincey imparted at “The Vern” and observed the competitive effect that this had at Ardno, South Boorook and Golf Hill.

As a late teenager he loved measuring cattle and always wondered why the lightest cow was the first to be culled even though she had often weaned the heaviest calf.

These two lessons were later to become the core of his breeding philosophy – the ability to do, the ability to produce and reproduce.
By 1992 after 15 years of Merino breeding and a wool crash he glimpsed the meat vision and had a fling with the Rambouillet only to discard them for downsy wool within 2 years.

Upon first viewing the Dohne in 2003 he realised that the fibre for food generation was waiting at the gate and so purchasing a “second-hand” Uardry ram he went commercial in 2004.

“I wanted to breed barrell with the softness and fleshing to handle the protein rich pasture and damp climate.”
“I admired the wearability of the Dohne’s mustering speed, high fibre grass only diet, respect for fences, maintenance ease and do-ability.”

By 2019 lifetime NLW in the Wean Ratio family averaged 148% whilst their wean ratio average was 68%.